I’ve finally managed to break free from my Banana Bread rut. Don’t get me wrong, there’s nothing like a slice of really good Banana Bread. The ponytails just love it and it is a great way to use up my never-ending pile of over-ripe bananas each weekend. But after a few months, the love starts to fade a bit.

I bought some zucchini to use in a veggie chili that I made recently and had a large zucchini left over. Then I realized it was time to start making room for another kind of loaf in my life.

I baked this bread on Saturday afternoon after my daughters’ swimming lessons, and the moans of hunger from the girls started about 10 minutes before I removed it from the oven. As soon as the loaf was cool enough to handle, I sliced and served a piece to each of them. When I turned around, I discovered that half the loaf was gone. In my house, you have to eat fast if you want to get your share. So, I think that this loaf is appropriately named. However, I might have also called it Chocolate & Zucchini Take Photo Quick Bread – since it was disappearing faster than the money in my wallet after payday. My husband Kevin has pointed out that I need to be patient, as the family is still getting used to this whole “cook and click” routine and that a picture of a partial loaf proves that it is a good recipe. Hopefully you agree? 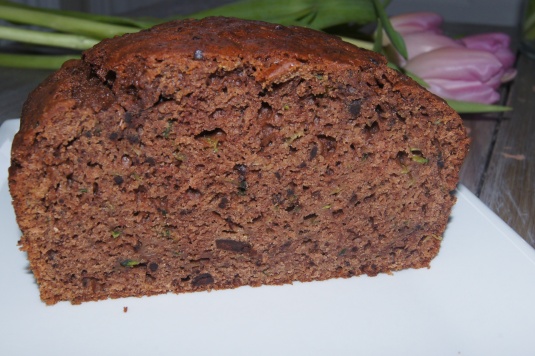 In medium bowl whisk together eggs, sugar, oil, sour cream and vanilla. In a second bowl, stir together the two flours, cocoa, baking powder, baking soda and salt. Fold the dry ingredients into the wet ingredients and stir until combined. Add zucchini and mix well. Pour the mixture into the prepared loaf pan and bake for 50 to 55 minutes (until inserted toothpick comes out clean). Remove from the pan and cool on a rack.

As much as I love to cook, a bit of the joy slips away when my ponytails look at a dish and start to groan like their arms are being slowly torn from their socket, or make faces that imply a sock that has been worn for several months is dangling precariously close to their cute little nostrils. Naturally, I’m more drawn to recipes that I know are going to be guaranteed hits with everyone who eats at my table. Call me crazy, but their little smiles and nods of approval make the mountain of dishes that I always leave behind in the kitchen somewhat more bearable.

So, when I stumbled upon a recipe for Pastitsio (pronounced pah-stee-tsee-oh) last weekend, I headed straight to the kitchen to start the meat sauce. A rich creamy sauce over a meat-pasta combo—how could I go wrong? I actually set out to make Aubergine Lasagna, after reading a recent post by Charles over at Five Euro Foods – but I didn’t buy enough eggplant on shopping day. Mind you, pastitsio is actually very similar to Charles’ dish—both recipes include delicious béchamel and meat sauces.

The morning after I made this dish, I proudly consulted with Miss Kerassia, my authority on all things Greek. Miss Kerassia is a wonderful home cook who moved to Toronto from Greece some time ago. She works at my daughter’s daycare, and I look forward to her warm, welcoming greeting every morning. She tells me that Pastichio (as it is also known) is the equivalent of lasagne for Greeks, and it is a favourite go-to meal for her and many of her friends.

Kerassia educated me on how this dish has been influenced by Italy and Turkey, two neighbouring countries to Greece. Pastitsio takes its name from the Italian pasticcio, which means baked savory pies with meat, fish, or pasta. She talked about how the unique spice combination in this dish (cinnamon, nutmeg and allspice) is in fact reflective of Turkish origins. While I only sprinkled a pinch of cinnamon on top of the béchamel sauce before baking, Kerassia likes to add a cinnamon stick to the meat sauce while it is cooking—so I’ve added that optional step to the recipe below. However I should point out that the version that I made did not include any allspice.

If you’re looking for a smile or two next time you spend time in the kitchen, then I highly recommend this recipe. 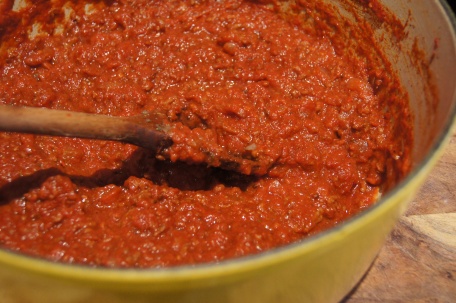 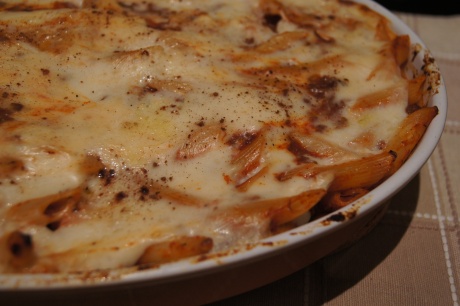 Adapted from Three Sisters Around the Greek Table

Sauté onions with olive oil in a large sauté pan over medium-high heat until soft (about 5 minutes). Add ground beef and cook until brown, adding salt to the beef as it cooks. Break up the beef as it cooks. Add the wine and cook until the wine is reduced by half. Add the tomato paste, crushed tomato sauce, oregano, thyme, cinnamon stick (if usin) and pepper. Bring sauce to a boil, lower the heat and simmer until the sauce has thickened, about 30 minutes. If the sauce is too thick, add some water. Remove cinnamon stick (if using) and remove from heat.

Melt the butter in a sauce pan over medium heat. Add the flour and mix with a spoon until the flour and butter are combined. Gradually add milk and whisk (using magic whisk) continuously to avoid any lumps from forming. Simmer until sauce is thick and creamy, about 10 minutes. Remove sauce from heat before it reaches boiling point. Add the cheese and set aside until ready to use.

Prepare meat sauce and set aside.

Bring large pot of salted water to boil and cook pasta until al dente (or as you like it).

Place the cooked penne in an 11” x 14” in baking dish (rectangular or oval) and sprinkle with the cheese.

Pour the meat sauce on top of the penne and mix together until the penne is evenly coated with sauce.

Prepare the béchamel sauce and spread evenly on top of the pasta with meat sauce.

Top the béchamel sauce with cheese and slivers of butter. Sprinkle on cinnamon and nutmeg. Place in a preheated oven for 25 to 35 minutes, or until lightly browned.

Let the dish sit for 10 minutes before cutting and serving.

They say that many hands make light work. But, I think that all depends on the size of the hands.

Although little hands—like those of two energetic and competitive (“no, I want to add the honey”) ponytails —certainly do make things more fun. Well, fun in a making sure your helpers don’t eat all the ingredients before they are added kind of way. Okay, and fun in a bonding kind of way too.

These granola bars are perfect for making with little ones, because there are only four simple steps involved. Measure. Add. Mix. Pour. Of course you must also put them in the oven, but that is no different than lifting a spoon or a fork to your mouth, is it?

The end-result of all that adding and mixing is pretty tasty, and rather healthy I might add. These are perfect to make if you’re looking to reduce the number of pre-made, store-bought snacks (with packaging) in your world. Not that there’s anything wrong with buying snacks—we all have busy lives. I just like to mix things up (literally) and add some homemade snacks to our routine. These are fast and easy.

I’ve adapted the recipe that I found with some substitutions, and added in a few extra goodies. We really like this recipe, but if you have a granola bar recipe that you recommend, I’d love to hear about it. 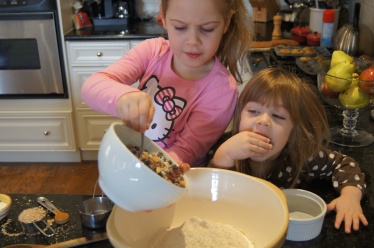 Adapted from the printed version of TogetherFamily.ca

Over the holidays, I was nominated for the Versatile Blogger Award by Eva at Kitchen Inspirations, which I humbly accepted. Eva is a long-time friend, who I have known for more than 20 years. Food has been a constant in our friendship—we’ve shared a meal and a laugh in countless restaurants in both Toronto and out West (Eva and her husband John visited me when I lived in Vancouver), and our homes. Receiving an invitation to dinner at Eva’s is akin to winning the lottery because you are guaranteed a Michelin star-worthy meal with perfectly-paired wines. One memorable evening was a relaxing international tapas dinner in front of the fire, which I’m not soon to forget because all the courses were captured on a printed menu keepsake. Fortunately Eva and John took an instant liking to my husband Kevin 10 years ago—so much so, that I’m not sure where their alliance would fall if my husband and I ever separated. Let’s hope we don’t have to put that one to the test ever.

I made two recipes from Eva’s blog for our New Year’s celebration and I highly recommend them both. The Caramelized Onion and Cheddar Dip and Cheez-Itz crackers were both gone in a flash.

As part of this award, I’m to share 7 Things About Myself 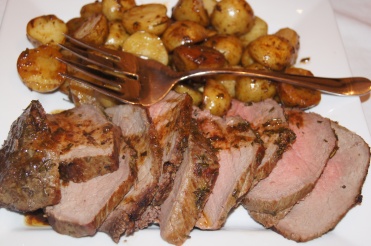 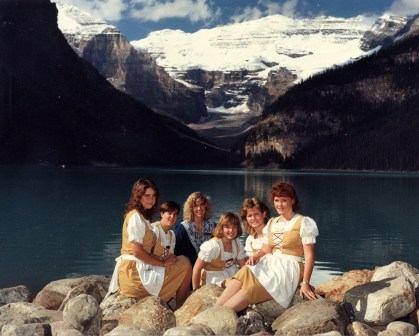 I'm the swiss miss on the far left.