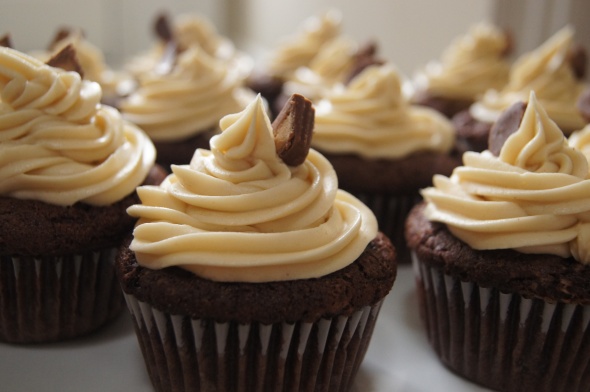 Some days, brushing your teeth or getting to the office on time feels like you’re climbing Mount Kilimanjaro. You know those days?

Those are the days that you pray you have some left-overs in your freezer and that there’s something good on TV that night.

I’ve been having quite a few of “those days” lately. By the time I get both ponytails dropped off at daycare and make my way downtown on the subway (which never seems to be running on time), I’ve feel like I need to grab a stiff drink instead of just a coffee. I’m even more tired at the end of the day, so I’ve been sticking to the meals that I know are fast and easy– and I haven’t been trying many new dishes.

I did manage to find the energy to make Peanut Butter and Chocolate Cupcakes for my husband’s birthday. Peanut butter cups are his favourite and I’ve been looking for ways to incorporate them into my desserts (like the Moose Tracks Ice Cream Pie). This recipe was fun to make with the girls because they could peel the peanut butter cups from the wrappers and drop them into the batter at the right time. I think they were worth the effort. Isn’t is always worth the effort to make things for your family?

I also made my own frosting this time and I was glad that I gave this a try. I must tell you that I never have the meringue powder usually required to make buttercream frosting and I don’t like to use egg whites when kids will be eating them. That’s why I’ve always just used icing from a tin. So, when I found a buttercream recipe that didn’t require either ingredient, I just had to try it. You can make this without the peanut butter for an all around buttercream frosting.

(Makes 18) Adapted from allrecipes; by Ladan

Frost the cupcakes when cool.

Top each cupcake with a piece of pb cup (Cut each pb cup in half; cut each half in thirds) 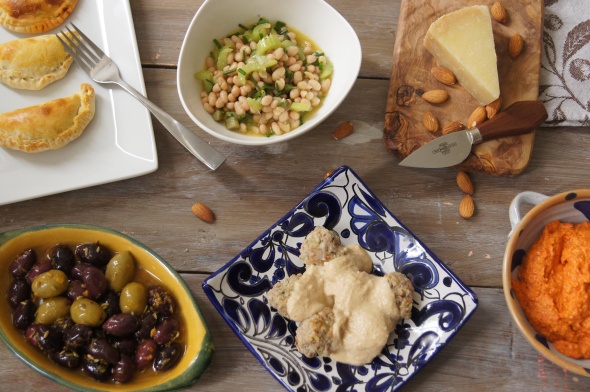 There’s nothing quite like a tapas-filled evening. Some people think that tapas are just appies—but they are in fact so much more than that. I read one definition of tapas that stated they could be any type of food, as long as the dish is small and served with a drink. Now there’s a definition I can really get behind—a type of food that requires a drink in order to be legitimate. No wonder I consider tapas to be the perfect food.

Based on their definition, you’d think an evening of tapas would go something like this:

Not quite, in my case. It goes more like this:

But that’s what a tapas feast is all about, in my opinion. Lots of drinks (to legitimize the tapas) and lots of refills for those small plates.

Last night Eva (of KitchenInspirations) and her husband JT joined us for a tapas night that certainly lived up to its name—as each tapas was in fact served with a drink! It was loads of fun and our dinner went late into the evening. We had the appies and second course with the ponytails (as I made sure there were some kid-friendly items), and then finished course #3 (and dessert) after the girls went to bed. Eva brought several different dishes (see below) and they were all amazing.

Even if a tapas night isn’t up your alley, you could make most of these versatile dishes as appies, sides or mains. They are a great way to add some zip to a favourite go-to meal–at whatever stage you decide to add them.

Preheat oven to 400°. Place the sea salt and paprika in a mortar and grind with the pestle to a fine powder. Alternatively, use a coffee grinder (designated for spices). Place the almonds on a baking sheet and toast for 8 to 10 minutes, stirring occasionally, until golden and fragrant. Watch after 7 minutes because they can burn quickly. Pour into a heatproof bowl. Drizzle over olive oil and stir to ensure all the nuts are lightly and evenly coated. Add extra oil, if necessary. Sprinkle with the salt and paprika mixture and stir again. Transfer to a small bowl and serve at room temperature. (NOTE: I halved this recipe and it was the perfect quantity.)

Olives with Orange and Lemon

Place the olives, orange and lemon rind, shallots, cinnamon and seeds in a bowl. Whisk the vinegar, olive oil, orange juice, mint and parsley together in a bowl and pour over the lives. Toss well, then cover and let chill for 1 to 2 days before serving. (NOTE: I didn’t add the shallots, as I was stretched for time; still tasted great.)

Drain the beans and rinse well with cold water, then drain again. Place the beans, celery and gherkin in a bowl.Whisk the olive oil, vinegar, garlic, mustard, parsley and sugar together win a bowl and season to taste with salt and pepper. Pour the vinaigrette over the bean mixture and toss well. Transfer to a serving dish and sprinkle with the chives. Serve at room temperature. (NOTE: I’ll definitely make this again as a side for sandwiches and burgers this summer.)

Preheat oven to 400°. Place half the olive oil in a roasting pan that will hold the asparagus spears in a single layer and swirl it around to cover the base. Half each slice of serrano ham in half lengthwise. Trim and discard the coarse woody ends of each asparagus spear, then wrap a slice of ha around the stem end of each spear. Place in the prepared roasting pan and lightly brush with the remaining oil. Roast the spears in the preheated oven for 10 minutes, depending on the thickness of the asparagus. They should still be firm so that you can pick them up with your fingers. (NOTE: This would make a a super easy and tasty side dish for countless dishes.)

Source: Recipes above (some adapted) from Perfect Tapas by Parragon.

NOTE: Next time I will definitely halve this recipe when using for tapas–even though it would be great with chicken.

If it is Tuesday, chances are pretty good that I’m going to be making tacos. They’re easy, they’re fast and they’re a vessel for lots and lots of cheese. What’s not to love?

Even when you love something a lot, you can get a little tired of it. Sometimes you just need a change.

That’s how I was feeling when I set out to shake up Taco Tuesdays. I wanted something a little different that would still be a hit with the girls. I found a lot of taco casseroles online, but they all used taco seasoning packages. I came up with this Tex-Mex Taco Bake that uses spices you’re likely to have on hand. It takes a little longer to prepare than standard tacos, but it’s a nice change of pace. The tacos lose most of their crunch in the process, but you still get a little bit of crunch along the edges.

But you don’t have to wait until a Tuesday to make this—it is a great meal any day of the week.

As you can see by this photo, breaking up the shells is a great job to delegate—especially to princesses! 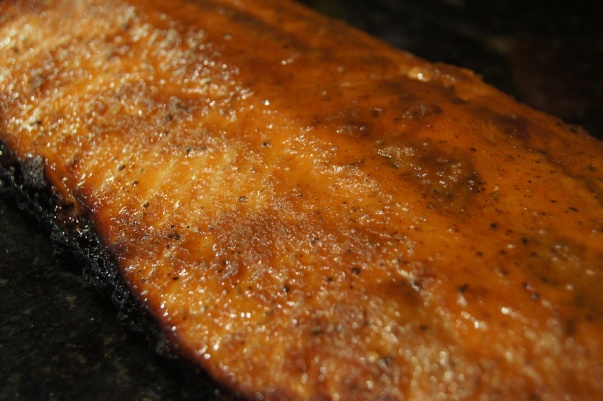 When I lived in British Columbia, one of my favourite things to do was have a picnic lunch with a variety of breads, cheeses, pâté and some incomparable Indian Candy Salmon. If you’ve never tried Indian Candy Salmon, you really must, if you get the chance. It is brined salmon that has been cold-smoked for up to two weeks and the end result is a type of sweet, salmon jerky.

But the hard part is that I’ve never found it outside B.C. and I don’t have the patience (or equipment) to make this myself by smoking the salmon. However, the good news is that the salmon recipe I’m going to share with you today is the closest thing I’ve found, in flavour, to Indian Candy Salmon—although it is not a precise match because it is no where near Indian Candy in terms of the “jerky” texture.

I’ve made this a number of times for guests over the past two years and it is always met with rave reviews from adults and kids alike. In fact, seven year-old Robert, a friend of the family, started calling me “Salmon Barb” after I made this on New Year’s Eve a couple years ago. I now make it for him most times we stay with his family at their cottage in Wasaga Beach because he likes it so much.

You can buy planks at gourmet food and kitchen shops, supermarkets and home improvement centres. I buy my cedar planks in packages of six at Costco, which is where I also buy my salmon. The planks are approximately 7″ x 16″ (you will need one at least this size for a 4-5 lb salmon.) There are also quite a wide range of cedar planks available on amazon.com. The label on the planks should say untreated and “food grade.”

Worst case scenario, you can wrap the salmon in foil and cook it on the barbeque. I do this with the small pieces that I cut off (so that the salmon fits on the plank) and they still taste great.

Mix all ingredients in a medium bowl and store in an airtight container.

View from the Mayan Ruins, Tulum

My family and I landed at the Toronto airport late last night in our sandals, sundresses and shorts—and instantly missed the warm Mexican sun as we raced to our parked car.We just spent a wonderful week at a resort called Dreams Riviera Cancun located in Puerto Morelos, just outside of Cancun. It was everything I could have hoped for in a vacation—relaxing and luxurious with lots of great food and drinks.

I never really adjusted to the two-hour time difference, and woke up around 5 a.m. most mornings. This turned out to be a great advantage, as the best lounge chairs at the pool and beach were already claimed (with a towel or personal item) by 5:30 a.m. I couldn’t believe it actually—but it helped to remind me of something I’d forgotten…

How inspirational it can be to watch the sun come up.

I was also inspired by the many tropical flavour combinations that I enjoyed over the week—lime, cilantro and chili (ceviche); watermelon and mint (mojitos); cucumber and mint (granita); and coconut (ice cream) and Kahlua.

One day soon I’ll recreate the shrimp ceviche that I had almost every day for lunch, but in the meantime, I’ve recreated the dish—coconut ice cream and kahlua—that was introduced to me by one of the waiters at Oceana, my favourite restaurant at the resort. It is so simple, but the flavour combination is a keeper. It explains why I had this almost every day too!

Hopefully the effects of my vacation will last longer than a day or two. I know I’ll be thinking longingly of those magical sunrises as I get ready for work each morning. But I’m curious—what’s the most spectacular sunrise or sunset you’ve experienced in your travels?