Memories of Denmark and Ebelskivers

Do your favourite travel memories revolve around food? Now of course there are the places that you wander between meals—the museums, the artisan markets, or the ancient burial grounds. But does your mind always drift back to that incredible triple cream brie that oozed perfectly over your baguette or that rum and raisin scone with the to-die-for clotted cream that made you believe you were a member of the royal family? Am I all alone on this one?

It’s been more than five, ten, okay, 20 years, but I vividly remember the day I was greeted by a family friend’s sister at the Aalborg train station waiving her little red and white Danish flag so that I’d recognize her. Thanks to my warm and welcoming host and her family, I learned a lot about the Danish culture during my five-day stop-over and I saw a lot of the local sights and sounds, including the Aalborg Tower and Zoo. But what really stands out in my mind? (No, not the aquavit.) I clearly remember the celebratory family dinner with the entire Christensen clan, where I was introduced to the Danish tradition of eating ebelskivers on special occasions.  (Okay, and maybe I remember  a cute Danish boy as well.)

I’ve been thinking about ebelskivers for all these years and finally decided to buy myself the special pan required to make them. Allow me to introduce you to ebelskivers if you’re not familiar with them.

Apparently, Denmark is famous for its apples, which are known as “ebler.”  The literal translation of ebelskiver (pronounced “able-skeevers”) is “sliced apples” although most ebelskivers do not include apple slices. Abelskivers are in fact little pancake balls (called “pancake puffs” in the US) that according to Wikipedia are “solid like a pancake but light and fluffy like a popover.”

While one of the traditional ways to serve ebelskivers is with strawberry or raspberry jam and icing sugar (especially on special occasions and during the Christmas season), these versatile little round spheres can be served anytime of day—as desserts, savory snacks or at breakfast, depending on which fillings or toppings you choose. 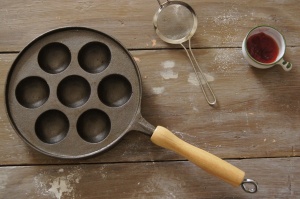 This is my new ebelskiver pan

The abelskiver pan itself is a real conversation piece. There’s one story that tells of Vikings returning fiercely hungry from a battle and placing their damaged shields over a hot fire and cooking the pancakes in the indentations. (This is the image that was floating through my mind as I used my cast iron pan.) The special pans are often passed down from generation to generation. For example, when my mom’s best friend immigrated to Canada from Denmark more than 50 years ago, she didn’t bring much with her—but she did bring her grandmother’s ebelskiver pan.

I made these ebelskivers a second time this weekend, as we had an early Mother’s Day brunch with my mom (since we won’t be able to see her next weekend.) The girls just love pancakes, and these little “pancake balls” didn’t disappoint. Although I think it had something to do with all that dipping in jam and icing sugar!

We served the ebelskivers on my grandmother’s platter,
which was just perfect for a mother’s day brunch (Note the hotel for dolls on the couch behind!)

From Ebelskivers, by Kevin Crafts

For Preparing and Serving

In a large bowl, whisk together the flour, sugar, baking powder and salt. In a small bowl, lightly whisk the egg yolks, then whisk in the milk, melted butter and vanilla extract (if using). Add the yolk mixture to the flour mixture and, using a wooden spoon, stir until well blended. The batter will be lumpy.

In a clean bowl, using an electric mixer on high speed, beat the egg whites until stiff, but not dry, peaks form. Using a spatula, fold about one-third of the egg whites into the batter to lighten it, then fold in the rest just until no white streaks remain. Use the batter right away.

Here’s my mom taking a turn flipping these little jewels.

Brush the wells of the ebelskiver pan with some of the melted butter and place over medium heat. When the butter starts to bubble, add about 3 tablespoons batter to each well. (I used an ice cream scoop for this and it worked well.)

Transfer the finished pancakes to a platter and keep warm in the oven while you repeat to make 2 more batches. Dust the warm pancakes with the confectioners’ sugar and serve right away. 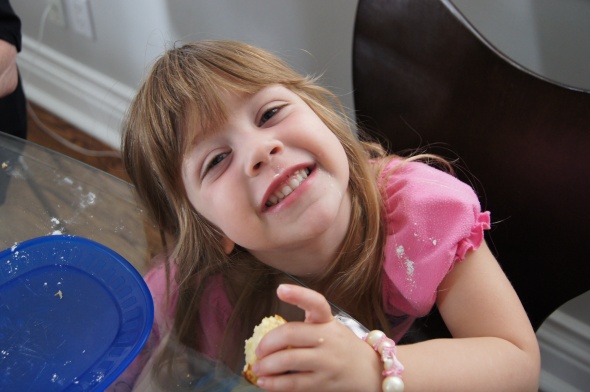