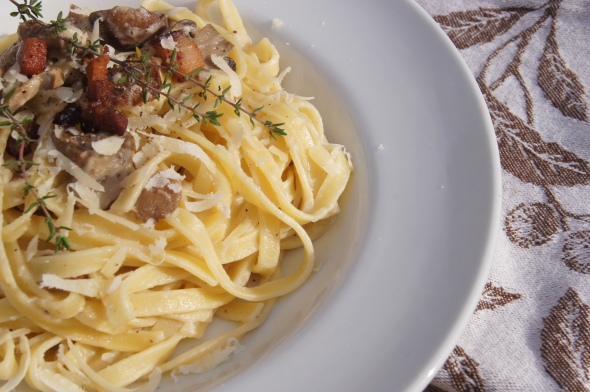 On the same weekend every year, we hop into the car giddy as school children, wave goodbye to the ponytails on grandma’s balcony and head for wine country as fast as we can.

Can you think of a better way to celebrate our anniversary than with 24-hours of freedom? We got married in Niagara-on-the-Lake, Ontario, so we love to return whenever we can–especially on our annivesary weekend.

The Niagara region has been gaining a lot of attention for its award-winning wines in recent years. There are more than 70 wineries in the area and lucky for us it is less than two hours from Toronto. Would you believe that Southern Ontario is the same lattitude as Provence in Southern France? It’s true! 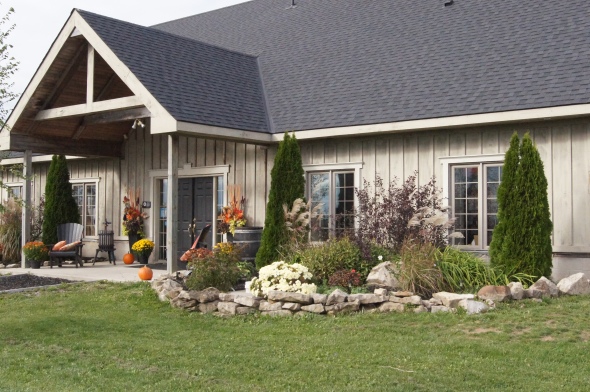 Our first stop on our getaway was Ridge Road Winery. It’s a boutique winery known for its hand-crafted, award winning wines. But I like this winery for more than its wines. Owners Jayne and Sean have been friends for many years–in fact, my first visit to this property was to visit Jayne’s grandmother when we were in high school. They’ve worked very hard over the past 15 or so years to make this dream a reality and now it’s a thriving business with quite a loyal following of Ridge Road wine lovers. 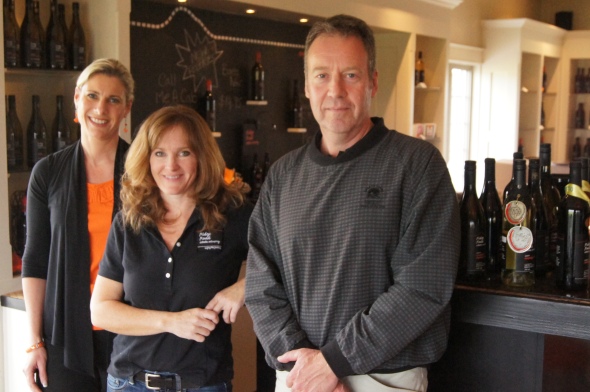 Sharon (the Sommelier), Jayne and my husband Kevin

Fortunately, Jayne was working that afternoon and so we were able to spend a couple of hours catching up and sampling their excellent selection of wines. (Sean is the winemaker.)  It was easy to settle in and relax in their cozy tasting area overlooking the vineyard. (Jayne designed the tasting room.) 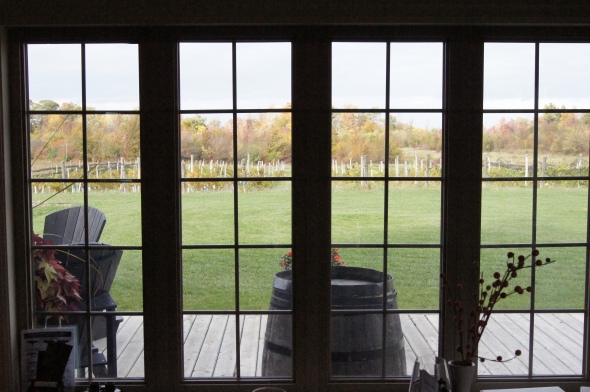 Sharon, a sommelier who works there, helped us to map out our route for the rest of our trip by recommending some terrific new wineries that we should visit.

One of them was Colaneri in Niagara-on-the-Lake. This winery makes you feel like you have just walked into a quaint Tuscan village. Colaneri is known for its appassimento style wines, which are made from grapes that have been dried first to concentrate their flavour. You may be familiar with the well-known Italian amarone wines, which are made using the same process.

We were running out of daylight, so we headed straight for our favourite place to stay in NOTL, The Charles Inn. The historic inn was built shortly after the War of 1812.

Our tradition on these min-breaks is to have some “house wine” in our room before dinner. We had a bottle of 1999 Brunello di Montalcino that we bought in Tuscany on our honeymoon. My husband still complains that his shoulder has never been the same since he carried all of the wine, honey, pesto, and olive oil that I insisted were essential souvenirs.

The restaurant at the Charles Inn is not to be missed. It is one of my all-time favourite restaurants and the food never disappoints. We enjoyed the tasting menu with wine pairings, which I highly recommend. The appetizer was our favourite: Mushroom and Parmesan Tagliatelle (the inspiration for the recipe in this post).

En route to pick up the girls the next day, we stopped in a couple more wineries recommended by Sharon. One of my favourites was the The Good Earth Winery and Cooking School.

Photos at The Good Earth Winery and Cooking School.
Wouldn’t you love to sit down to a meal at that table?

I was delighted to find this charming self-serve pantry at The Good Earth and couldn’t resist buying some (frozen) double smoked bacon. You just leave a note and drop your money in the ceramic canister inside. How cool is that? 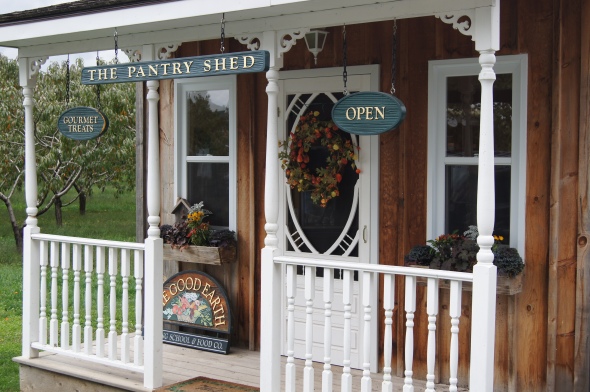 Our 24-hours of freedom always comes to an end far too quickly–just like a good bottle of wine! So, I set out to make something with the ingredients that I had picked up along our wine tour: the double smoked bacon and some verjus from Ridge Road Winery.

In case you’re not familiar with it, verjus is made by pressing unripened grapes and is a wine-friendly alternative to vinegar in salad dressings. It is also a great way to add flavour to sauces. Because it is not fermented, it is not alcoholic, so it is also kid-friendly!

Cook pasta according to package directions.

Meanwhile, saute onions in olive oil for 2 to 3 minutes, until softened. Add mushrooms, thyme, salt and pepper, and cook for another 4-5 minutes. Add cream and cook for about 5 minutes until it starts to thicken slightly. Add grated parmesan and cook for an additional 2 minutes. Add 1 to 2 tbsp of verjus (according to taste). Add pasta and stir well. Sprinkle with bacon before serving.

If you prefer a creamier sauce, you can add a few splashes of cream to the pasta. Alternatively, you can reduce the amount of pasta that you make to 3/4 lb. 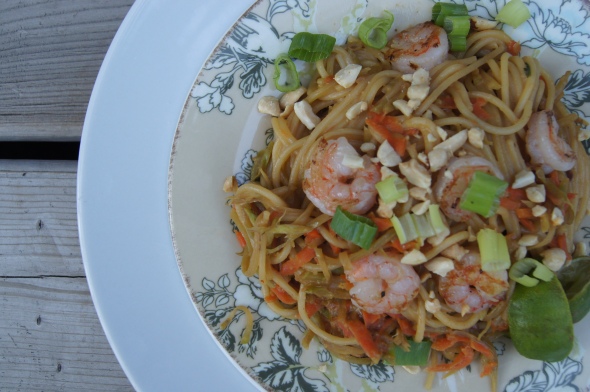 I’ve mentioned that most weeknights are pretty crazy these days. Well, here’s an easy weeknight recipe for those nights where there’s no need to rush out the door for an activity. It can be prepared in just under 30 minutes and it’s always a hit with the girls. I’ve made this for several of my oldest ponytail’s friends who’ve had dinner at our place, and they’ve all eaten several plates.

This makes oodles of noodles, as I’ve mentioned in the headline. Some nights there’s very little leftover, while other nights there’s enough for another meal–so it fits well with my curent “cooking in bulk” strategy. This also freezes well.

I have to give credit to the idea of making noodles with broccoli slaw to Ann over at Cooking Healthy for Me–although Ann closed down her blog several months ago.  Ann’s recipe was quite different, as it used carrot juice and pre-made peanut sauce. I tried Ann’s recipe but made quite a few modifications and ended up with this version of peanut noodles. (Thanks Ann!) It’s now part of our regular weeknight rotation.

As much as I love to cook, a bit of the joy slips away when my ponytails look at a dish and start to groan like their arms are being slowly torn from their socket, or make faces that imply a sock that has been worn for several months is dangling precariously close to their cute little nostrils. Naturally, I’m more drawn to recipes that I know are going to be guaranteed hits with everyone who eats at my table. Call me crazy, but their little smiles and nods of approval make the mountain of dishes that I always leave behind in the kitchen somewhat more bearable.

So, when I stumbled upon a recipe for Pastitsio (pronounced pah-stee-tsee-oh) last weekend, I headed straight to the kitchen to start the meat sauce. A rich creamy sauce over a meat-pasta combo—how could I go wrong? I actually set out to make Aubergine Lasagna, after reading a recent post by Charles over at Five Euro Foods – but I didn’t buy enough eggplant on shopping day. Mind you, pastitsio is actually very similar to Charles’ dish—both recipes include delicious béchamel and meat sauces.

The morning after I made this dish, I proudly consulted with Miss Kerassia, my authority on all things Greek. Miss Kerassia is a wonderful home cook who moved to Toronto from Greece some time ago. She works at my daughter’s daycare, and I look forward to her warm, welcoming greeting every morning. She tells me that Pastichio (as it is also known) is the equivalent of lasagne for Greeks, and it is a favourite go-to meal for her and many of her friends.

Kerassia educated me on how this dish has been influenced by Italy and Turkey, two neighbouring countries to Greece. Pastitsio takes its name from the Italian pasticcio, which means baked savory pies with meat, fish, or pasta. She talked about how the unique spice combination in this dish (cinnamon, nutmeg and allspice) is in fact reflective of Turkish origins. While I only sprinkled a pinch of cinnamon on top of the béchamel sauce before baking, Kerassia likes to add a cinnamon stick to the meat sauce while it is cooking—so I’ve added that optional step to the recipe below. However I should point out that the version that I made did not include any allspice.

If you’re looking for a smile or two next time you spend time in the kitchen, then I highly recommend this recipe.

Adapted from Three Sisters Around the Greek Table

Sauté onions with olive oil in a large sauté pan over medium-high heat until soft (about 5 minutes). Add ground beef and cook until brown, adding salt to the beef as it cooks. Break up the beef as it cooks. Add the wine and cook until the wine is reduced by half. Add the tomato paste, crushed tomato sauce, oregano, thyme, cinnamon stick (if usin) and pepper. Bring sauce to a boil, lower the heat and simmer until the sauce has thickened, about 30 minutes. If the sauce is too thick, add some water. Remove cinnamon stick (if using) and remove from heat.

Melt the butter in a sauce pan over medium heat. Add the flour and mix with a spoon until the flour and butter are combined. Gradually add milk and whisk (using magic whisk) continuously to avoid any lumps from forming. Simmer until sauce is thick and creamy, about 10 minutes. Remove sauce from heat before it reaches boiling point. Add the cheese and set aside until ready to use.

Prepare meat sauce and set aside.

Bring large pot of salted water to boil and cook pasta until al dente (or as you like it).

Place the cooked penne in an 11” x 14” in baking dish (rectangular or oval) and sprinkle with the cheese.

Pour the meat sauce on top of the penne and mix together until the penne is evenly coated with sauce.

Prepare the béchamel sauce and spread evenly on top of the pasta with meat sauce.

Top the béchamel sauce with cheese and slivers of butter. Sprinkle on cinnamon and nutmeg. Place in a preheated oven for 25 to 35 minutes, or until lightly browned.

Let the dish sit for 10 minutes before cutting and serving.