If apple pie is comfort food, then cinnamon crumble apple pie—served warm with ice cream and caramel sauce—is the equivalent of wearing your favourite warm cozy sweater, while having a foot massage and being served a martini. Well, I think so anyway.

I wish that I could take credit for it . . . that the recipe was an old family secret or my own creation. But I can’t. I found the recipe in Bon Appetite magazine in 2003 and I’ve been making it ever since.

This pie was the “jumping off point” (as the designers from all of those HGTV shows I’m addicted to always like to say), for a dinner party I hosted on Saturday. I started with the pie and built the menu around it, with other dishes that felt appropriate for fall.

However, the pie was the only “tried and true” recipe on the menu. I also made a pork loin stuffed with baby spinach, prosciutto, and dried apricots—but I had never made it before. I know that is breaking the rule of make what you know when having company for dinner. I was hoping that if didn’t turn out, I could divert the attention away from my failure by serving lots of wine and finishing off with this apple pie. I think everything turned out okay though . . . hopefully my guests didn’t have to stop at McDonalds on the way home???

We enjoyed a lovely evening with my work colleagues and their families. (I’m fortunate to work with a group of people who I really like!) The ponytails did an amazing job of taking our charming three-year old guest, Miss A, under their wings. In fact, I think it was one of the smoothest dinner parties we’ve ever had, as there was quite a long stretch at the “adult table” where I forgot the kids were even there! (You’ve gotta like that.) The only thing missing was the other members of our team who live and work in Ottawa.

How about you? Do you ever try new recipes when you’re having company? 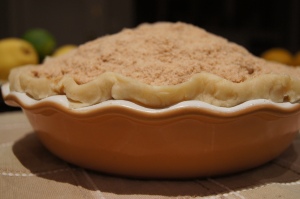 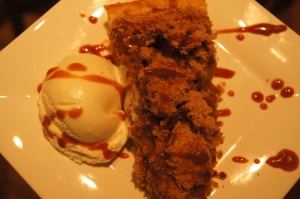 Reduce oven temperature to 350°F. Bake until apples in center are tender when pierced and filling is bubbling thickly at edges, about 45 minutes longer. Cool until warm, about 1 hour.