Dinner With A Couple Of Little Rats And Roosters 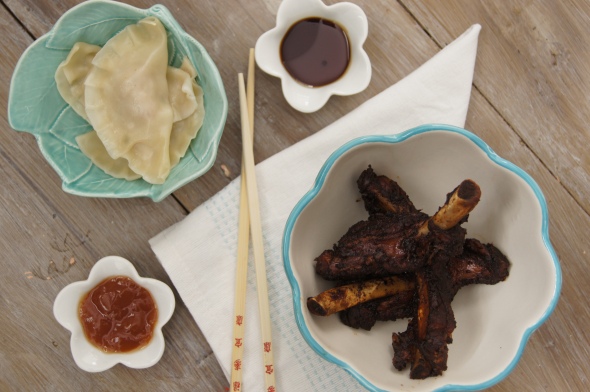 It didn’t take long for me to figure out that the ponytails were fired up about Chinese New Year. My oldest daughter was working on writing a short play about it and was talking non-stop about how great it was to be a rooster (her Chinese zodiac animal). Meanwhile my youngest daughter was counting down the days until the Chinese New Year parade at school.

Don’t you love the way children find such joy in learning new things?

We really want to encourage and embrace this interest the girls have in different cultures and traditions. So, I bought them each a children’s book about Chinese New Year on my way home from a business trip and decided that we would celebrate it too.

Soon after that I asked my colleague Amanda if she could recommend a few authentic Chinese dishes. But she didn’t just provide me with some ideas—she surprized me with a very large carrying case full of all the essentials for a Chinese New Year celebration: decorations, candies, sauces and noodles. I was blown away by her generosity!

Some of the treats from Amanda: crunchy peanuts, candies and Korean crackers.

However, we did encounter a set-back. At the last minute, my husband was asked to go to an important work event on Feb. 1oth. But after Amanda’s kind gesture, there was no turning back. Close friends Carolyn and Glen agreed to join the girls and I for our celebration. With two young daughters the same age as the ponytails, it would mean an evening with two little rats and two roosters (according to their Chinese zodiac animals of course)!

Armed with a great dumpling recipe from Amanda, I set out to research some other ideas for our feast. Two bloggers came to mind immediately: Norma from Garden to Wok and Sissi from With a Glass. Norma teaches cooking classes and has written two cookbooks: My Students’ Favorite Chinese Recipes and Wokking Your Way to Lowfat Cooking. An avid gardener, she also keeps her loyal readers up-to-date on the adventures in her garden with regular Harvest Monday posts. Based in Switzerland, Sissi has a flair for creating innovative recipes that are inspired by her love of a diverse range of cuisines, particularly Asian and Hungarian cuisines. I met Sissi in the early days of blogging and I’ve been a fan of her site ever since.

When I saw Sissi’s Chinese Spare Ribs Braised in Soy Sauce I knew that I had to make them. They looked sticky and fall-off-the-bone good. Well, I can tell you that they didn’t disappoint. Best. Ribs. Ever. OMG, you must make these ribs. The flavour combination of the dark soy sauce, star anise and cinnamon is really incredible. However, you MUST use the dark soy sauce (which I had never used before) because the regular soy sauce simply will not achieve the same result. The dark soy sauce is thicker and more intense in flavour than regular soy sauce. 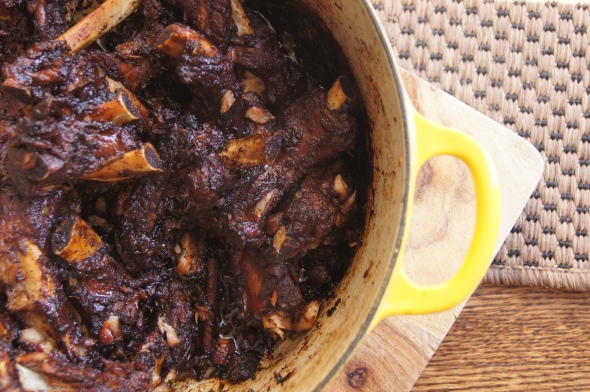 I also returned to Norma’s Shrimp Stir-fry recipe that I’ve made a number of times with great success, but I used snow peas in place of the asparagus this time. This dish went really well with the Chinese noodles that Amanda gave us. Best of all, it’s a low-fat recipe!

I also found inspiration from the online version of one of my favourite magazines, House & Home. The lemon sauce for this chicken is nothing like the version that you get at a restaurant or with your favourite take-out. You’ve got to try this Lemon Chicken recipe—the flavour is just amazing.

Almond cookies are a traditional way to end a Chinese New Year celebration and kids love them. The texture of these cookies was spot on with what I’ve had in restaurants—they had a bit of a crunch but still melted in your mouth. Next time I make them I’m going to play around with the recipe, as I prefer not to use shortening in my baking. 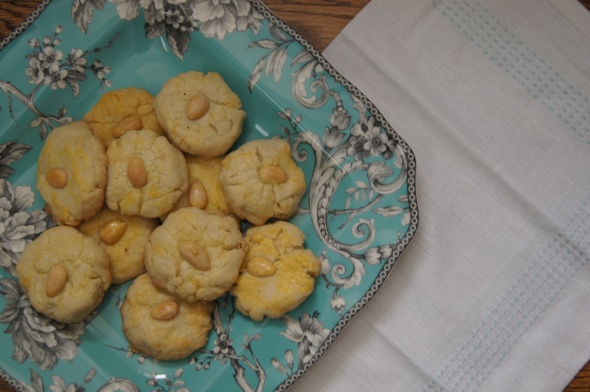 And what celebration would be complete without a live performance? Our two adorable roosters and rats entertained us with original songs such as: We Are the Roosters; Sweet Love and a rap song entitled Hurricane. 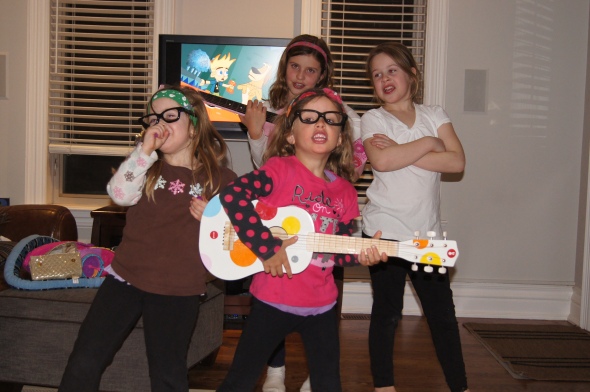 Rockin it out with the rats and the roosters!

It was a night of great food, with great friends. In fact, we had so much fun that I think this just might become an annual celebration for us. Now I just need to find a way to repay Amanda’s generosity. Any suggestions?

Mix all ingredients (except dumpling wrappers) well in a large bowl.

Place a level tablespoon of filling in the centre of each dumpling wrapper. Moisten edges with water. Fold in half and pinch together to create a pouch that seals in the mixture. Alternatively, you could use a dumpling or ravioli maker as I did that automatically seals each dumpling. I did need to double check each dumpling and pinch any spots where it wasn’t completely sealed by the ravioli maker. Repeat with remaining wrappers and filling.

Steam the dumplings for 10 to 12 minutes. (Use a pan/wok of boiling water and bamboo baskets for steaming.) Alternatively you can boil them in water for 5 to 6 minutes. They can also be fried afterwards (but I didn’t do this).

For the dipping sauce, mix the soy sauce and sesame oil in a small bowl. Serve with the dumplings.

Thanks to Sissi’s suggestion, I used my ravioli maker to make the dumplings.