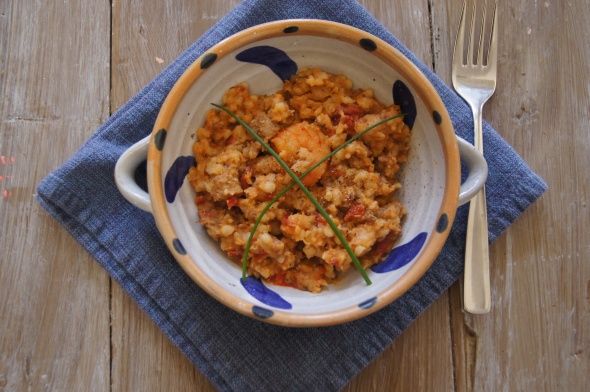 I tried it. I liked it. And I made it again, and again. That’s the way it went with this Sausage and Barley Jambalaya recipe. It wasn’t the first time I’d had barley, as my blogging pal Eva at KitchenInspirations has been making barley risotto for a long time because of its health benefits.

Barley deserves all the credit for giving this dish a lovely nutty and creamy texture that is quite unique. It also makes the dish hearty, filling and good for you! 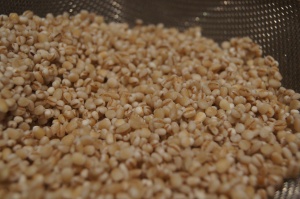 A cereal grain, barley is heralded for its ability to help reduce cholesterol and reduce the risk of cardiovascular diseases, among other benefits. Go figure! It is also what I would call a “low profile” grain—it goes along its way quietly, while quinoa continues to make a splash in culinary circles, even landing a couple of book deals. I find it all a bit surprising, given that barley is a key ingredient in one of the world’s most popular drinks.

I decided that since I liked the Barley Jambalaya so much, that I needed to try it in something else, something other than a soup or a stew. So, I came up with a new barley salad that I think you may like… 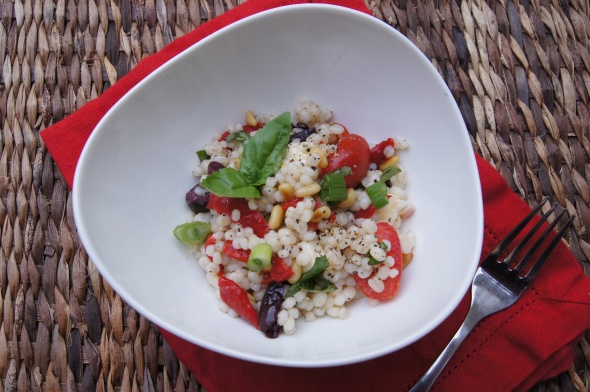 There you have it. There are lots of reasons to give barley at try—it’s inexpensive, versatile and a healthy alternative to orzo or rice.

If you decide that barley isn’t for you, then you might like Betsy’s Couscous Salad, over at Bits and Breadcrumbs, which also features kalamata olives, basil and feta with a lovely lemon dressing.

My husband has had a thing for Jambalaya for quite some time now. But sometimes he cheats on his great love and goes out with Risotto. What’s a guy to do when he’s torn between two (or three) loves?

But those days are over, now that I’ve brought these two rivals together by creating Jambalaya Risotto just for him. (It’s easier to keep my eye on them this way.) His days of sneaking around are over—hopefully! 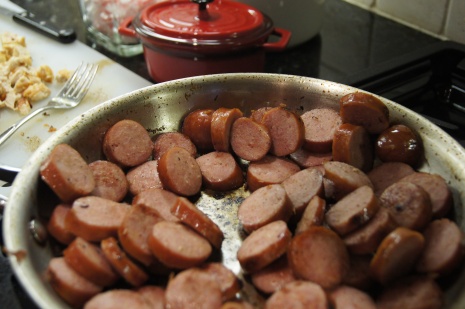 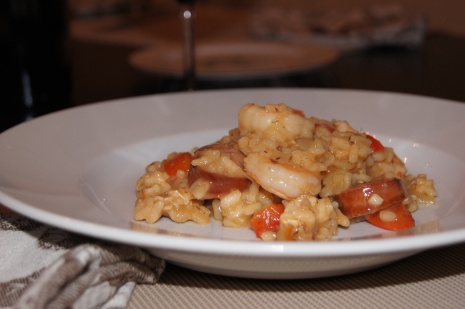 Add tomatoes, chicken breast and sausage and mix well. Stir 1 cup simmering broth into rice and cook, stirring constantly and keeping at a strong simmer, until absorbed. Continue cooking and adding broth, about 1/2 cup at a time, stirring frequently and letting each addition be absorbed before adding next. Add shrimp when you have approximately 1 cup of broth remaining. Continue adding broth until rice is just tender and creamy-looking but still al dente. (Total time about 18 to 22 minutes.)